Turkey, family, and pumpkin pie are hallmarks of the American holiday of Thanksgiving Day. This year I spent Thanksgiving away from family and the land of pumpkin pie and turkey by celebrating the holiday in Rome, Italy. It was such an interesting experience that I thought I’d share it with you.To begin with, if you were in Italy and decided to have a do-it-yourself Thanksgiving dinner, you’d probably have to make most of the dinner from scratch. Italians do not know the art of making pumpkin pies, or any pies for that matter. Pies are non-existent in their bakeries. 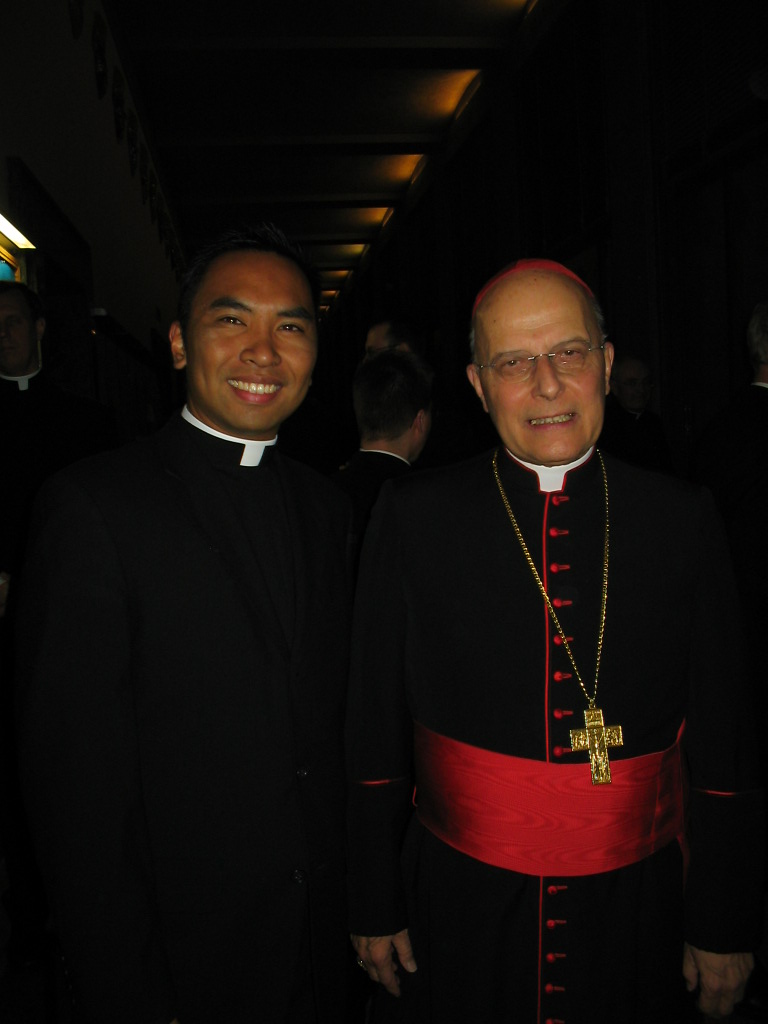 The other, crucial aspect of the dinner is the turkey. Yet, here again one will encounter difficulties. Turkey is sold only in the guise of lunch meat in Italian stores. After all, who in their right senses would want to eat turkey? If you are lucky and can order a turkey from a butcher with connections to the poultry yards, then you’ve overcome a critical hurdle to an authentic Thanksgiving dinner.

Now I was very fortunate in that I did not have to make Thanksgiving dinner. I was invited to the North American College’s (the “NAC”) Mass and Dinner. Normally, this Vatican campus holds its Thanksgiving “dinner” at lunch time. It is more of a low-key affair.

Before  I go on, let me just mention that the NAC is the national seminary of the Americas supported by the American bishops. It is about two doors away from St. Peter’s Basilica and is extra-territorial, meaning that it is part of the Vatican City State rather than Italian property.

This year, all traditions for keeping the dinner low-key vanished thanks to the Consistory of Cardinals with the Cardinals and Cardinal-elects pouring in from around the globe, and the schedule changed dramatically. The lunch was upped to a formal dinner. American Cardinals, archbishops, bishops, and a crowd of priests celebrated the Mass which presaged the dinner. It was really impressive to see so many mitred heads participating in the American holiday celebration in Rome.

An amusing incident occurred during the homily. While speaking of the Holy Father’s upcoming visit to America, the bishop slipped and talked about the Pope’s visit to the “Holy- the United States”. We all thought he had nearly canonized our country as the “Holy Land”!

After Mass, the dinner commenced. The 5th year priests served the dinner and it was spectacular. Guests were assigned to the tables representing their home states. I, coming from California, was at the table with fellow Californians, including Cardinal Mahoney of Los Angeles. Our table had a very special touch in that the wine served came not from Italy’s fertile soil but from our very own Californian wineries- a special touch of the homeland!

We had turkey, beautiful turkey served after typical Italian style appetizers and lasagna (!) with mashed potatoes and spinach. Spinach seems to be a favorite vegetable here in Rome, for what reason I cannot imagine. The cranberry sauce came from the dazzling origin of the can. I don’t know whether the seminary imports these cans from the States or whether it can be purchased at Castrois, a very expensive food import store in Rome.

After we had dutifully consumed our portions of the turkey, the moment for the highlight of the dinner arrived: serving the pumpkin pie. This quintessential American pie was ushered in with great songs and an Elvis impersonator. The dozens or so pies took 2 days in the making because the seminarians learned from past experience that their own hands, and not those of Italian cooks, were necessary to ensure the success of the crowning piece of the dinner.

At any rate, after we had duly given God thanks for the blessings upon our beloved nation as the President encouraged us, we then went forth into the cold streets of Rome to our respective dwellings. We were fortified by a great meal, great company, and the inevitable nostalgia that comes from celebrating a national holiday in a foreign city.