UPDATE:  St. Cantius parish has removed their post and photos of the virgin consecrated at their parish.  You may still see it cached on at least one search engine.  Are they trying to distance themselves from their own liturgical faux paus by removing their online entry?  That’s not the way to do it. Either they had documentation backing up their actions (which they could have shared) or they decided of their own authority to do things the way they did.  If the latter was the case, all they had to do was issue an explanation or an apology for those paying attention to the matter.  Something like “We did not realize the rubrics called for the virgin to remain in the sanctuary…. and mindful of the fact that people look to us for information on how the rubrics are to be carried out, apologize for this.  We will follow them more carefully should another virgin honor us with her consecration.” 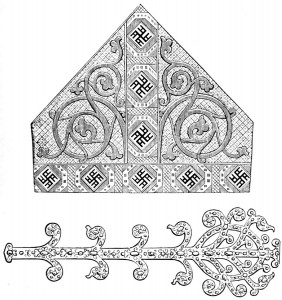 virginity recently.  (For photos, simply search online.  The brief description of the ceremony and who celebrated it are on one site, and the photos are on Flicker)  However, the photos taken of her consecration surprised me.  It is not clear what Rite was used, the current one, or the 1962 Rite (to my knowledge, Summorum Pontificorum doesn’t apply to this case).  What was surprising?  Several things:

1)  Whether the 1970 or the 1962 Rites is used, the virgin is to be seated in the presbyterium (sanctuary) along with the priests and bishop from the calling of the candidate on through the rest of the Mass.  I am surprised that for a parish that apparently cares for the rubrics, that Rev. Miss. Marie Beccaloni was left out of the sanctuary for what is probably most of the Mass.  You can tell this by the photos of her exciting the sanctuary with the priest celebrant still seated in the sanctuary and of her with her veil and insignia on, actually sitting in the pews with her bridesmaids.

It is true that I myself did not sit in the sanctuary, but this was for an eminently practical reason- my consecration ceremony was held in a very small cathedral adoration chapel

that had like 2′ around the altar of space; even the concelebrating priests had to sit in the pews.  The main cathedral itself was closed since it was in the middle of a three year renovation.   Beccaloni’s parish, however, has an enormous sanctuary compared to my tiny little one.  There was plenty of room for her to be seated in the sanctuary, even if they had to borrow three chairs and kneelers/cushions to do so.

2)  The most dramatic point* of the Rite of Consecration, whether it be in the 1962 or 1970 Rite, is of the sacred virgin receiving Holy Communion (if the rubrics are followed).  In the 1962 Rite, the virgin ascends the altar steps to receive Communion from the Bishop.  She doesn’t simply stay at her seat in the sanctuary, she climbs the additional 3-7 steps to the actual altar.  She kneels on the predella with her two attendants and receives under both Species.   Since the rubrics indicating that this was a Pontifical Mass was ignored to begin with (you don’t have a priest celebrating Mass with the Cardinal just sitting in choro, sorry, it isn’t done any more than you’d have an ordination done with the priest celebrating it and the bishop sitting in choro), Beccaloni probably did not receive Communion at the hands of her bishop under both Species (as is her right under both Rites).

Since this is a dramatic photo opportunity and there are no photos to this effect, one wonders if they made her receive Communion under one species at the altar rail at the hands of the priest!  The Church intends for the symbolism to be very clear to the faithful:  this is a spouse of Christ.  She consummates her wedding at the high altar, and the bishop who represents her Spouse communicates her under both Species at the altar.  Even in the 1970 Rite, the virgin, who is already seated in the sanctuary, leaves her place to approach the altar and receive directly after the Bishop, at the hands of the Bishop.  If there are steps, she climbs them.  If not, then she simply goes up close to the Bishop at the altar and there she receives.

3)  At this liturgy, one of the most important liturgies that a Diocesan Bishop can celebrate in his diocese, there are a mere handful of clerics (for what can be seen in the photos).  Here again, the Church is very clear about what is expected at a consecration ceremony:  the bishop is to be surrounded by the college of priests and important ministers.  Contrast  the consecration photos published by the parish to those of an ordination that took place at the very same parish!  There are over a dozen clerics in the sanctuary!  Yet the expectations are exactly the same.  The bishop is to be surrounded by his priests and ministers whether he does an ordination or a consecration.

Bottom line?  This is not a private vow ceremony.  This is not a profession of religious vows ceremony.  This is the ceremony of a bride being wed to Jesus Christ through the ministry of her bishop.  It was deliberately written over the centuries (as can be seen by the different Pontificals in existence) to take place in the same manner as an ordination.  Why?  Because of all the forms possible in the consecrated life, only sacred virgins going through this Rite fully participate in the Church’s charism and identity as virgin, bride, and mother.  She is the clearest image of the Church-Bride after Our Lady you can get.

It may make some people uncomfortable to see a sacred virgin in the sanctuary, but two thousand years of liturgical tradition (starting with the sacred Virgin who was physically a sanctuary for 9 months) should not be ignored.  Of course, things will always get dicey when you try to mix a non-pontifical Mass with a Rite that demands pontificals, which is why it is not suitable to use the 1962 Rite for non-monastics.  While it was a very nice gesture for the Cardinal to try to accommodate the desire for a traditional liturgy, it just does not work out.

*Obviously, liturgically, the two most important moments in the Consecration Rite is when the virgin is ontologically changed to be a bride of Christ through the prayer of consecration and when the bread and wine are ontologically changed to be the Body of Christ through the prayer of eucharistic consecration.  Most people, never having seen a sacred virgin ascend the steps of a high altar for Communion, would point to the prostration during the Litany of Saints (a favorite photo moment for ordinations) as being the most visually compelling moment.  When, however, the rubrics are followed and Mass is held in a location with a high altar and is celebrated at the high altar with several steps, this is certainly the most visually dramatic moments of the entire Liturgy.  Astute liturgists who have read the different versions of the Rites promulgated over the centuries have pointed out plenty of parallels to priestly ordinations.  Examples abound beginning with the call of the candidate from the pews to within the sanctuary, the Litany of the Saints, the presentation of the candle to the bishop at the offertory by the newly ordained priest or virgin, the placing of hands within the bishop’s, the bishop personally giving Communion to the newly ordained priest or consecrated virgin, etc. 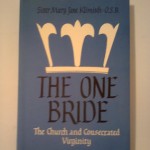 ecration of virgins is one of the most important diocesan Masses a bishop can celebrate surrounded by his priests (2) which Pontifical [name and century] specified that enough Hosts from that Mass were reserved for the sacred virgin to consume for the octave following the consecration will receive a complementary copy of The One Bride by Sr. Klimisch due to be released any day now in reprint form.  Use the contact form for this as the comments do not always work.

Update: The One Bride has now been republished and available on Amazon. Those who purchased it at the discounted pre-order rate will be mailed their copy as soon as we get our shipment in.

Update #3:  Because of the St. John Cantius priests’ reluctance to keep the consecration post up on their website, I am going to add another thought.  Both the 1962 Rite and the 1970 Rite (and the Rites proceeding them throughout the centuries) called for a Bishop to celebrate not just the Consecration, but the Mass.  In the older Rites, the Bishop gives Communion to the virgins.  He receives the candles from the virgins after the offertory.  He prays the prayers written specifically for the Consecration Mass.  What on earth is a mere priest doing, usurping the place of the bishop in this Mass?  There is a reason why it is in the Roman Pontifical.  The only excuse I can come up with is that they truly do not understand the gravity of this vocation.  Only if you think it is akin to a private vow ceremony or a “consecration” to Our Lady ceremony can one proceed thus.

9 Responses to Presbyterium: What This Means for Consecrated Virgins