Yesterday’s conference was very interesting and we had some very special speakers and guests. It was held in my “classroom” which is one of the University’s halls. 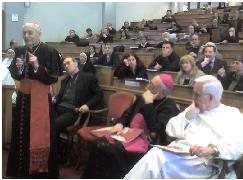 While I made a personal recording of most of the talks, our DoIHaveAVocation.com’s team has not translated them from the Italian because we believe they will be made available by the university in the major languages at some point in the near future. If the demand is great enough, we may in the future post the original Italian audios in our upcoming members section.  A text version translated into English of the recorded talks may also be provided. 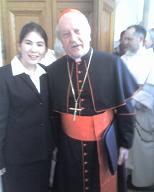 Cardinal Franc Rode presided during the first half of the congress. He gave an excellent introductory talk and it was a great honor for our university to have him with us for the morning. For those have not heard of Cardinal Rode before, he is in charge of the Congregation for Institutes of Consecrated Life and Societies of Apostolic Life. His office at the Vatican is to represent the Holy Father to religious institutes and others within consecrated life. In other words, your request to have your new order approved on a pontifical level would be processed by his office. Dispensation of vows, dismissal of religious, and other consecrated life related activities are done with a surprisingly small team in a nice set of offices next door to St. Peter’s Square.

The second half of the convention was presided over by Archbishop Francesco Coccopalmerio. Great talks were given and the discussion that ensued was lively and interesting. Of personal interest to me was the fact that during the break I had to take an exam and then realized that the author of the book we used was one of our speakers, and so I had him autograph it.

Overall, the experience at the congress was very positive and provided much needed insight into workable models of authority within religious life. It was refreshing to see the enthusiasm of the participants in this conference as it was a very valuable contribution to a deeper understanding of the vocation to religious life. This experience inspires us at DoIHaveAVocation.com to consider offering a conference for the benefit of those who are discerning their vocations in the Church.