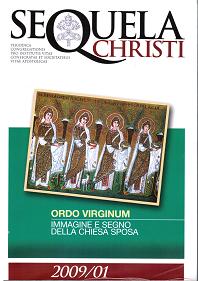 There are times when controversy kicks up on the internet about different vocational aspects. Most of the time I have chosen to let them pass because a lot of common questions will be covered in my upcoming book on vocations. However, there is quite a heated discussion at the moment as to whether primary virginity is required for consecrated virgins as opposed to “secondary” virginity.

Yes, my book on vocations will go into this issue in depth. I actually have arranged for a friend of mine who is discerning her vocation to write some thoughts on her struggle between entering a religious order to which she has been accepted, and becoming a consecrated virgin that will provide discerners with some unique insights into the matter. Another place you may be able to get greater detail on the Church’s understanding of primary & secondary virginity is through the USACV by getting a CD of the talk by Dr. Shalina Stilley, who provides a thomistic approach to the issue in the 2010 convocation. I personally haven’t heard it, but knowing the quality of her research and in discussing the topic with her a number of times while she was preparing the talk, I am sure it is quite informative.

Right now, I just want to mention that the author of one blog has given his reasons for believing that primary virginity is required for a valid consecration. The link to this blog is HERE.  For what it’s worth, I have actually read the letter to now-Cardinal Burke that is referred to in this post, and have a copy of it in my possession (Protocol 231/96/L) that was an affirmative response to his question on whether primary virginity was required for the consecration.   Primary virginity is assumed of the virgin, and the words “public violation” are there to help clue in the bishops to not force her to make a manifestation of conscience if she had voluntarily experienced sexual intercourse in the past.   This canon law student makes a very good point in his post about the manifestation of conscience.  I want to explain it a little bit better, one reason being that I wrote my thesis for becoming a canon lawyer on protecting people from unwarranted intrusions into their conscience.

If a woman has voluntarily fornicated or committed adultery, then she has objectively sinned (depending on the circumstances, her actual culpability might be slight or great).  By such an act, or by consummating holy matrimony, she thereby has given up her virginity.  Since women who have been married are barred from the consecration anyway, we will focus on fornication/adultery by a single female and its implications for the woman seeking the consecration.

First of all, she has committed an objectively grave sin with another person.   Second, no matter how secret their rendezvous, at least two human beings know it- the male and the female.   Third, everyone has the right to privacy and a good reputation.  They are “innocent” until proven guilty, so to speak.  Included in this right is the right to not be forced to manifest one’s conscience.  That is, no one can be forced to admit guilt (except the Church can morally compel people to go to confession to admit their guilt, but does not identify any specific priest one has to go to and what is discussed is in the internal forum) in the external forum.  For a bishop to ask, “are you a virgin”?  runs the risk of putting the  non-virgin into a situation where she may feel obligated to reveal her conscience “no!,  I had a one night stand thirty years ago with a high school sweetheart” just because he’s the bishop and she might feel she needs to give an honest answer.   In writing the Rite of Consecration to a Life of Virginity, the Congregation wanted to make sure that it was written in canonical language that made it clear that the woman had to be a virgin and yet protect the non-virgin’s right to maintain silence about her objectively sinful action outside of the confessional.

The verbiage in the Rite says that one of the three requirements for the candidates is “that they have never married or lived in open violation of chastity”.   Although some people want to interpret “open violation of chastity” as concubinage or some public knowledge of the woman’s sexual activity with a man, its basic interpretation is that chastity was openly violated when she fell through fornication or adultery.  This interpretation is reaffirmed in the private letter from the Congregation in the Vatican to the then Archbishop Burke.   This letter is private, and will not be published in an open manner, because permission for that has not been given either by the Vatican or by Cardinal Burke.  However, a copy of it may be requested from the Cardinal if one is, for example, a bishop.  For those who are determined to at least see an excerpt from the letter, the excerpt is on page 144 of Sequela Christi (the official periodical of the Congregation for Institutes of Consecrated Life and Societies of Apostolic Life), 2009/01.  While I’m at it, I will tell you upfront that although I do have a copy of this correspondence in my possession, I cannot distribute it without express permission, so you might as well directly contact the USACV or Cardinal Burke for a copy if you feel you have need of it.

Although he is not a modern theologian, St. Thomas Aquinas did discuss the requirement of primary virginity for women who wished to receive the consecration of virgins.  It is interesting that he specifically addresses certain points of modern contention such as whether the woman must be a virgin to receive the consecration, whether a priest can do the consecration, and the like, in his works.  Again, this is covered in greater detail in my upcoming book on vocations.  I am writing this as an aside for people who respect his opinion on the matter  since he is closer to our times than the fathers of the Church and sundry Church councils and documents that touched upon consecrated virgins.

Back to a manifestation of conscience.  The centuries of tradition and the recent private response of the Vatican make it clear that only a woman possessing primary virginity may validly receive the consecration of virgins.  However, we often encounter the woman who possesses “secondary virginity”.  That is, she has fornicated or committed adultery, and has repented and lived a life of chastity since.  She may be interested in the consecration because she was erroneously told by priests and even some bishops that she is eligible for it.  What the Rite does is makes it clear that the bishop cannot force her to admit that she lost her primary virginity.  He can ask her if she’s ever been married.  That’s public knowledge.  He can also ask if there is common, public knowledge of her living in an unchaste relationship.  Again, this is because it’s public knowledge.  However, he can’t directly ask her if she has lost primary virginity.  This is because she has the right to refrain from manifesting her conscience to him.  If she freely volunteers the information that she is no longer a virgin, he should not consecrate her.   If she brings it up to him or anyone else in confession, they should discourage her from receiving the consecration, but can’t enforce this because it is sealed information.  Theoretically, then, a non-virgin could actually receive the consecration.  However, the woman would have to wonder about her motivations for going through the motions of a ceremony that will not have any effect upon her.  She will not actually be a consecrated virgin in the eyes of God because she’s lost primary virginity.  Further, she will feel uncomfortable in proclaiming herself to be a consecrated virgin among genuine consecrated virgins who have indeed preserved their primary virginity.

Given the necessity for the bishop to respect the right to privacy and not asking a woman to make a manifestation of conscience on the one hand, and the desire to uphold the integrity of the vocation to consecrated virginity on the other hand, I propose a solution that will help bishops and women in their discernment without crossing boundaries.  I think the difference between “primary” and “secondary” virginity should be explained to the candidate.  Included in the application package, will be a declaration of eligibility that will be required of formal applicants.  This declaration would say that she certifies that she is a virgin in the primary sense.  Thus, a non-virgin can choose to drop out of the process without specifying any reason, and the fraudulent use of mental reservation “I’m a renewed virgin” will be reduced.