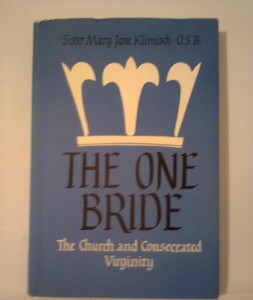 Several years ago I was doing research in a seminary library and decided for “down time” I would read a book on consecrated virginity. After climbing dusty stairs and sifting through dustier books, I came across this gem on consecrated virginity in its form prior to 1970. Sr. Klimisch takes you through what it means for the Church to be called Bride. She goes on to speak of how people can be called Brides of Christ. She also discusses religious life, and how that fits into the Church’s relationship with Christ. In one of her final chapters, Klimisch treats of nuns who receive the Consecration of Virgins.

It would have been nice had Sr. Mary Jane written a few years later, when the 1970 Rite came out and the lifestyle was not tethered to religious life. However, what she says is valid, and can give those who enter religious Order with the tradition of giving the Consecration of Virgins a nice meditation on their vocation.

As one would expect in a Benedictine, Sr. Klimisch is meticulous in her research. Every chapter is carefully footnoted, and I discovered many new authors and periodicals to look up. Thus far, I have to say that this is one of the best books to get when trying to understand the mystery of the Church as Bride and how we all fit into that reality of being part of the Bride of Christ.

I was able to obtain from Sr. Klimisch’s community a couple of extra copies of her book to lend, and I am going to be republishing her book in paperback form sometime in the very near future. I am not sure if it will be next week or later, but until that time, I will be offering a special pre-publication price. Once it is published, the list price will be higher. It is expensive and time consuming to purchase licenses and get the book ready for publication, and so the book’s cost reflects this. Right now, you can pre-order the book by purchasing via the link below. It will be shipped to you the next business day after I receive the books from the printers.

Update: The book is now available.

This entry was posted in Consecrated Life, Consecrated Virgins, Religious, Sister and tagged bride of christ, Klimisch, The One Bride. Bookmark the permalink.