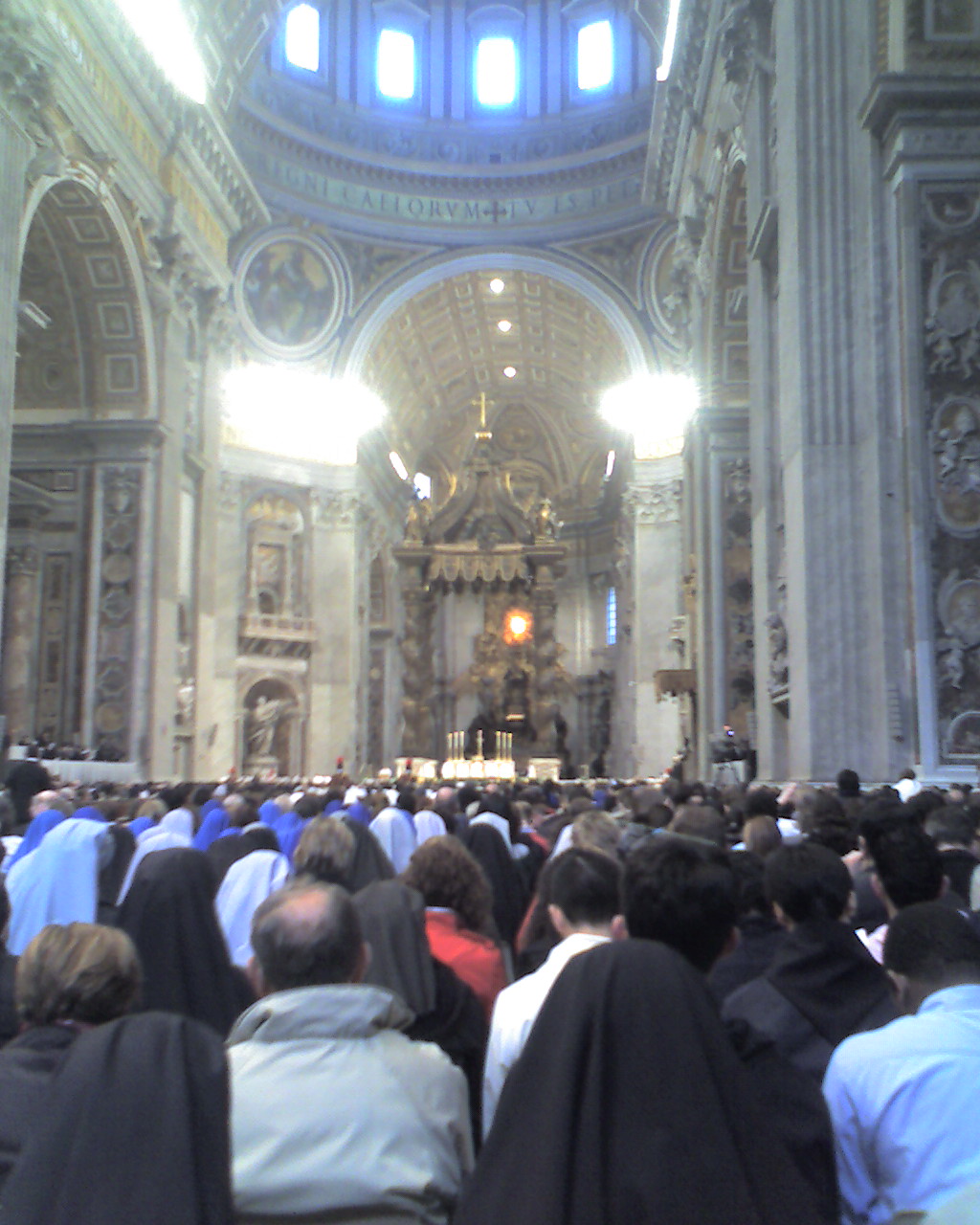 Each Christian is called by God to holiness and eternal happiness. The oil of catechumens prepares a candidate to enter into the call for universal holiness. The Sacrament of Confirmation strengthens the person to fulfill this call. Our vocation is fundamentally a call to holiness. How we live it out will differ according to the path God has chosen for us. But, we are united with the common bond of a vocation to holiness. 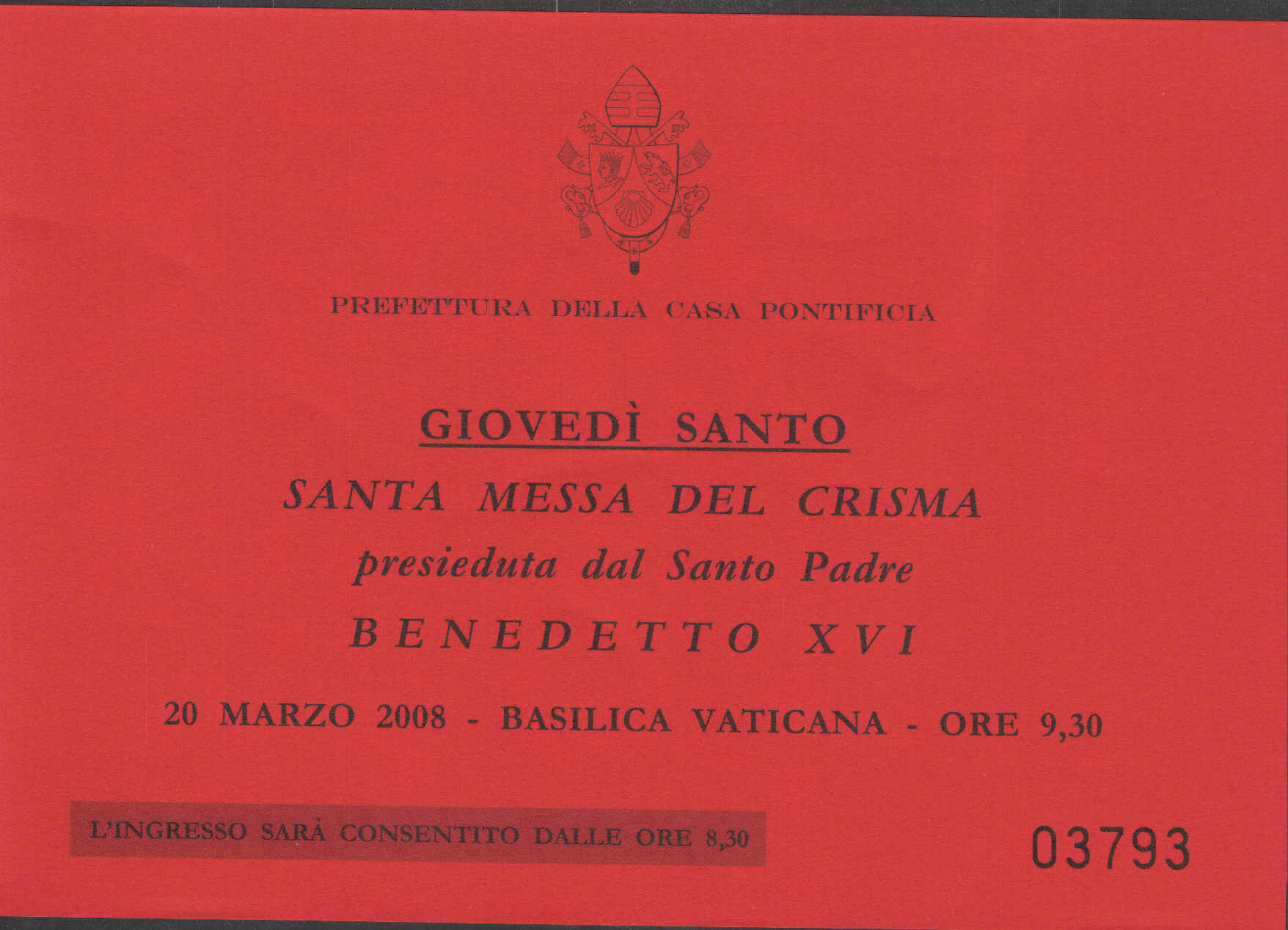 The procession of priests to reach their place in the Basilica was extremely long. I can’t even begin to estimate how many tens of hundreds of priests were present. All I can say is that it took probably twenty or thirty minutes just for a steady march of priests to get to their area near the sanctuary and wings. There was a great crowd of bishops as well, yet their procession did not last very long because they didn’t even fill the whole path from the doors to the sanctuary as the priests did.

His Holiness, Pope Benedict XVI, celebrated the Mass almost entirely in Latin. Only a few sentences of the liturgy were said in Italian by the Pontiff and everything else but the homily was in the language of the Church. The faithful could follow along in the 62 page complimentary commemorative booklet which had the Latin and Italian side by side to facilitate a greater comprehension of the words. 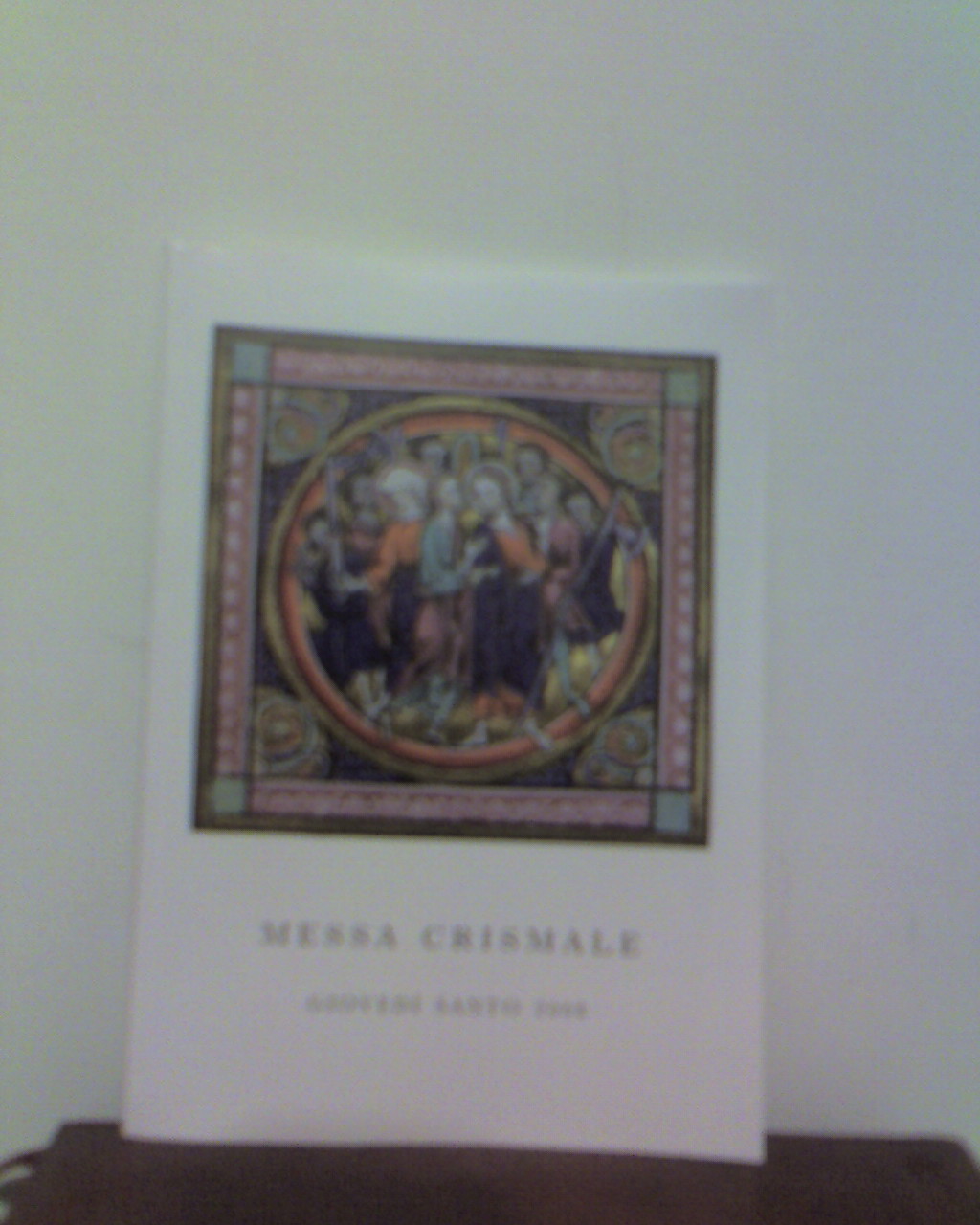 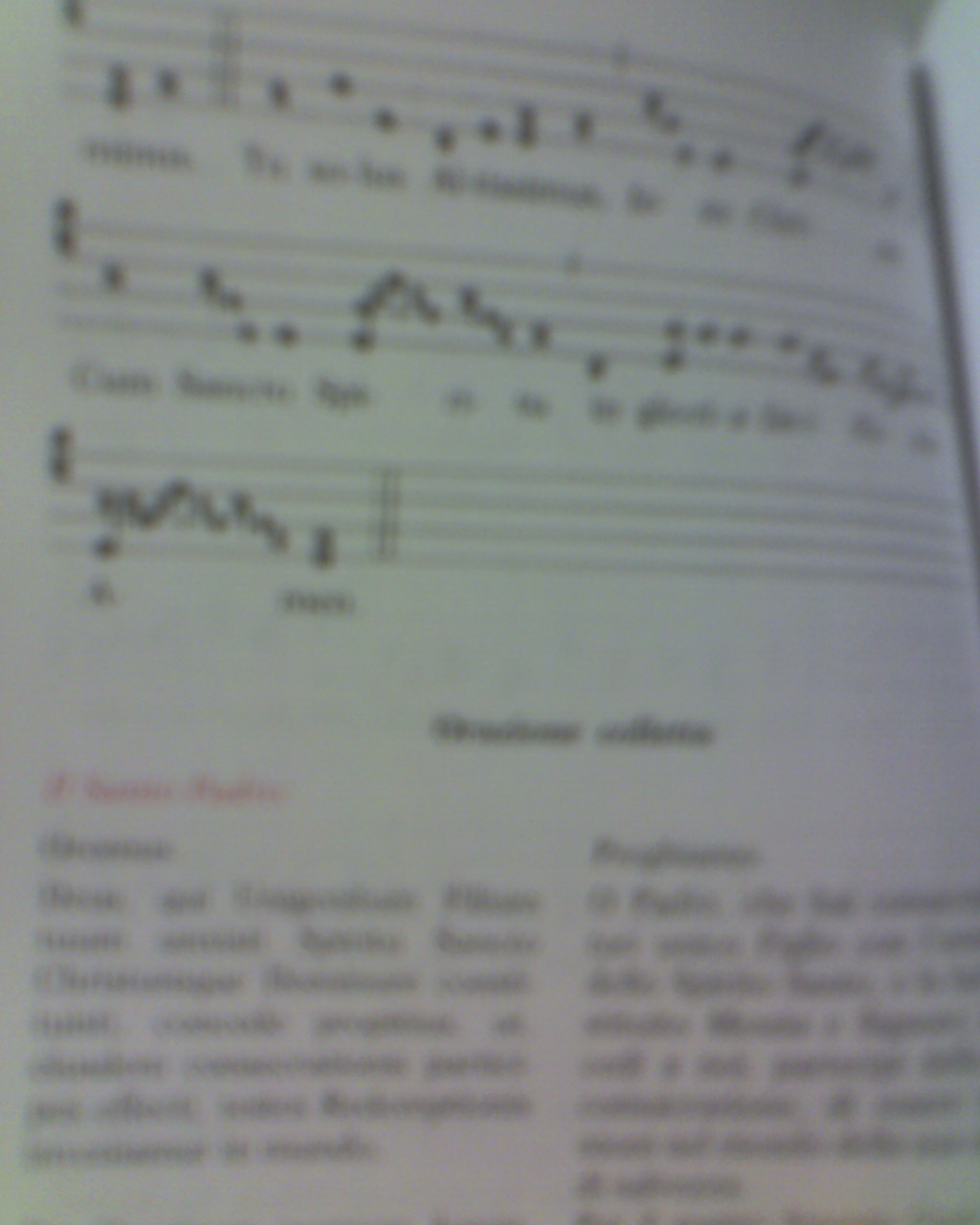 Since pontifical Masses use seven candles on the altar, I was wondering how they were going to arrange them on the altar as seven is an uneven number. The problem was solved by placing three candles on each side and one behind the crucifix (in the center) which faces the Pope. You can sort of see it in the photo at the top of this article.

Chrism Mass is significant because of the blessing of the oils which are used for catechumens, Confirmation, and Anointing of the Sick. Again, it highlights in its own way the vocation to holiness which is our common heritage as Catholics. The Mass is also significant in another, very profound way. It is really a Mass for the priests of the Diocese to gather together under their Bishop as his representatives in the Diocese. Strengthened by the renewal of their clerical promises and charged with continued ministry to the People of God, they go forth to use the oils blessed by the Bishop.

The homily given by the Holy Father was very beautiful and directed to the priests of the Diocese to encourage them in their ministry. He chose as his text the words of Isaiah “here I am”. He spoke of how priests who have been given themselves to the Lord’s service need to ask what this yes, this readiness on the part of the priest to God’s call entails. What is the essence of being a priest?

Taking his cue from Scripture, the priest is to understand that he is to stand before the Lord and to minister to Him. Their profession was “stand before the Lord” – look at him, be there for him. For the priests of God in Deuteronomy, “ultimately, the word [stare] meant a life in the presence of God and even a ministry on behalf of others. Like the others who cultivated the land, so the priest lived, so he kept the world towards God, and had to live with his eyes turned to Him. If this word now located in the book of the Mass immediately after the consecration of the gifts after the entry of the Lord through prayer, then this indicates to us our standing before [the presence of] the Lord present, and shows that is the Eucharist that is the centre of priestly life.”

The Pope went on to speak of how the priest must keep watch and vigilance for the Lord. He must be upright for the Lord and steadfast though alone. Then he spoke of how the priest must serve. In the celebration of the Eucharist, the priest serves both God and the people. He must serve the people in the sacraments. He should develop the “art of celebration” and to learn at the school of Christ and His Saints in prayer…

A “habit” can be developed of over-familiarity and the sacred become “familiar”, the Pope warned. Serving God in the liturgy should lead to obedience and not pride. He followed that warning up with a beautiful lesson on how Christ came to serve us.

This homily was very interesting, and although my translation is somewhat rough, I believe I conveyed the gist of what the Pope had to say to his priests.

After the homily, the priests renewed their sacerdotal promises in Latin. It didn’t take very long for the renewal of promises.

Since I arrived late towards the end of the line that snaked into the Vatican for Mass, I didn’t get a very good seat. So I did not have the opportunity to take a really good shot of the enormous containers of the blessed oil and chrism that appeared to be conveyed on some wheeled apparatus.

I will conclude by posting a shot of Sister near me at Mass. 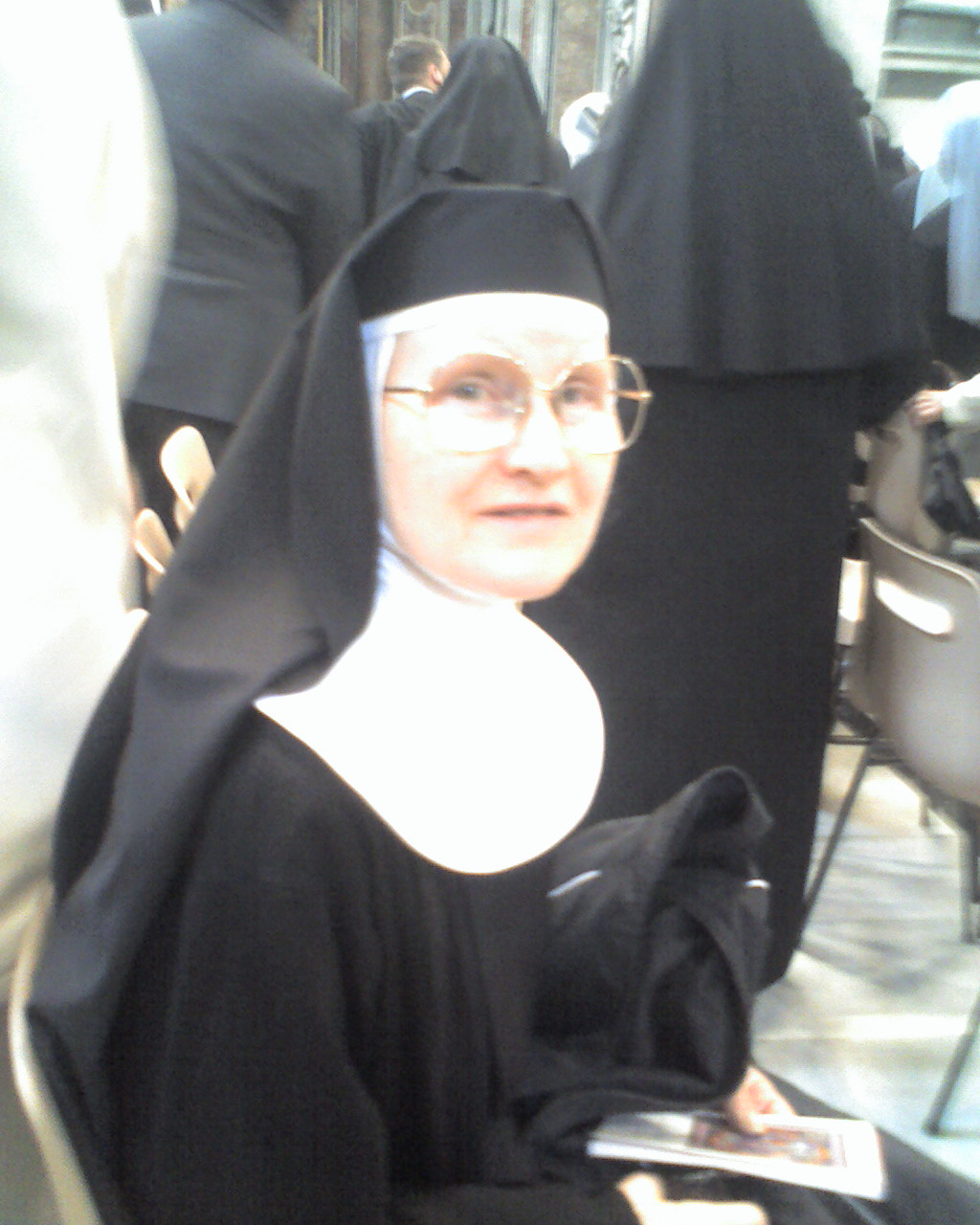