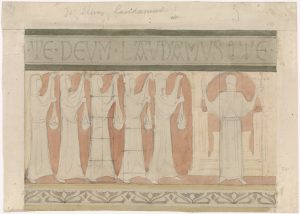 The Church has a specially honed vocabulary in which words have specific definitions and usages. These definitions may contrast with the normal use of the words by ordinary people in the world. An example of differing vocabulary is the common use of the word “adore” (e.g. “I adore babies!”) and the Catholic use (“I adore God” with latria worship/supreme love). Likewise, Catholics distinguish that there are three levels of “worship”, only one of which denotes “adoration”. That is, we “worship” Mary with hyperdulia veneration but God is the only object of adoration worship/veneration.

It should come as no surprise, therefore, to find that the Church has special definitions attached to words like chastity, celibacy, continence, virtue, vice, and virginity, which do not necessarily correspond to the meanings normally attached to those words by ordinary people in the world. Some terms the Church uses are better understood by people who are familiar with philosophy, because philosophy can help explain certain concepts like “willed” “formal” and “material”, which are necessary for the understanding of virginity, virtue, vice, etc.

There are various meanings to the word “virgin” that can be easily accessed through dictionaries. Usually, they focus on the physical state of the woman. Specifically, the colloquial use revolves on vaginal penetration, which will usually stretch or break the hymen. “Recovered virgins” are not a possibility to some people, and others think some kind of surgical reconstruction of that area renders one a virgin again.

Strict theological definition and use:

A wider sense and informal use of the term:

#1 and #2 are the focus of theological treatises, not #3. #3 is most often used in popular Catholic discourse and not with the intention of referring specifically to the virtue of virginity. Rather, the intention is to mark a particular demographic of unmarried persons. It should be recalled that the normative state of single people is that of virginity because that is what baptized non-married Catholics are called to live by virtue of their baptism. That not all are actually virgins does not affect this fundamental expectation of baptized unmarried persons. Therefore, we will not discuss #3 in this article.

Now let’s go on to #1 and #2 of the strict meaning of the word “virgin” in the Catholic Church.

A virgin is one who has not consented to venereal pleasure (acts). Thus an infant is born a virgin. It is this formal virginity that is a minimal expectation for all baptized unmarried persons.

Let’s unpack this a bit more. A virgin is one who has not consented to venereal pleasure (acts). This means that someone who wants to get married and in marriage enjoy the acts proper to married people but who in the meantime as a single has never consented to venereal pleasure/acts is a virgin. A woman who is raped is a virgin, provided that she did not consent to the act or any incidental pleasure that may have been present with it.

Now let’s go even further. To be a virgin is expected by the Church for baptized unmarried members. So, let’s talk about about “consent to venereal pleasure/acts”. What is forbidden for unmarried people is for them to voluntarily engage in sexual activity. It is forbidden for them to consent to it, both exteriorly and interiorly. This means that a person cannot express consent to fornication/adultery/sodomy/bestiality in order to save their life or that of other people. That would be sinful, because consenting to sexual activity with a person to whom one is not married is a sin.

We are called to refuse consent to solicitation. E.g. Alessandro ASKED St. Maria Goretti to have sex with him. He was trying to obtain her CONSENT to act in a manner contrary to chastity/virginity with him. She properly refused. This is our obligation! To refuse solicitation even if that means death or other negative reprecussions upon ourselves or our loved ones.

Now, let’s take another example. Let’s say someone is physically overcome and raped. The victim is NOT consenting exteriorly or interiorly to the rape. The victim is still a virgin in the eyes of God and the Church. This is a big deal! It means that the Church doesn’t, like non-Catholic people do, attach undue importance to the hymen, but to formal virginity. This doesn’t mean that the physical sign of virginity in women isn’t normally the hymen, but it does say that our theology and understanding of virginity is more nuanced than for non-Catholics.

That being said, we have to avoid one danger, which is to say that to be a virgin, if one can be raped (or have surgery or exercise) cannot have any physical connection, that it must be only in the mind. The Church does not teach that. Rather, the Church teaches that two things must simultaneously happen for a person to stop being a virgin – consent to venereal pleasure/act (the act of the will) and the physical venereal act itself. So if the act happens but is not consented to (e.g. someone is raped) then that person continues to be a virgin because consent is absent.

What about surgical interventions or exercise affecting the hymen? Does a stretching or breaking of the hymen through these means make someone a non-virgin? The answer to this question is very simple. Surgical intervention does not involve willed sexual pleasure. Neither does exercise (in and of itself). Therefore, a person who has lost the hymenal membrane through surgery or exercise does not cease to be a virgin in the eyes of God or the Church.

Once virginity is lost through full consent to a (corporeal) venereal act, then it is lost forever. God Himself cannot restore it. Why? Because God is a God of truth. A person cannot “un-experience” what has been done. It has factually happened, and historically happened. Even if the physical membrane is surgically (or even miraculously) restored, the moral human act has still factually occurred. Hence, the push for some Evangelical Christians or Muslims to have surgery for their hymens has no bearing on their status as virgins or non-virgins in the eyes of God but can only help to avoid death or perceived disgrace by their future husbands.

Thus far, we’ve only discussed virgins in the first strict sense of the word. Now let’s look to the other sense in the Church’s vocabulary.

A person who #1 is a virgin and #2 decides to maintain lifelong virginity for the sake of the Kingdom in following Christ is either a dedicated virgin or a virgin-person with a consecration. The dedicated virgin is one who does this by private resolution (propositum), vow, intention, promise, or oath. Lay members of Societies of Apostolic Life or Personal Prelatures or other non-consecrated forms of consecrated life are dedicated virgins if they are, in fact, virgins. They are dedicated continent people if they are not virgins.

This is the kind of virginity required for the consecration of virgins as brides of Christ. Until 1970, juridic virginity (and for a period of time, the absence of having been raped) was all that was required for eligibility for this solemn consecration or anointing. It denoted a woman who had never lost virginity by vaginal-penile sex. Victims of rape, though acknowledged by the Church as continuing to be virgins, were forbidden to receive the consecration for various reasons.

Now, the juridic virginity has been substituted by the 1970 Rite of Consecration of Virgins for the absence of non-public violations against chastity, and even more diluted by the Instruction Ecclesiae Sponsae Imago [ESI] with something amorphous or non-existent. What does this mean concretely?

Dr. Ed Peters, in his Studia Canonica article and brief recent article on ESI, lays out what the previous, present, and future requirements were/are/might be for women desirous of receiving the consecration of virgins. At the very least, juridic virginity meant absence of vaginal-penile intercourse. Some authors held that any act destructive of virginity was sufficient impediment [e.g. masturbation, oral sex, or lesbian sex] to the consecration. But one thing was absolutely clear, whether one held to a strict core minimum of “juridic virginity” as defined by the absence of consented vaginal-penal sex, or whether it was expanded to all consented-to venereal acts, both definitions for juridic virginity (for the purpose of admission to the consecration of virgins) required bodily continence!

Whether one restricts the interpretation of the word continence to its strictest meaning of abstention from voluntary sexual intercourse, or one has a broader understanding of it as meaning the abstention from voluntary sexual acts not limited to but including sexual intercourse, an act against continence destroys both the state of virginity and the virtue of virginity (separate things) forever. The novelty of ESI consists of the fact that it no longer requires the state of juridic virginity (absence of penile-vaginal sex) as a juridic criterion for consecration. Rather, it appears to allow for juridic “chastity” instead. How is this?

If a body kept in perfect continence is rejected without any disclaimers as an “essential” pre requisite for the consecration of virgins, then the whole of the meaning of the term “continence” is rejected. In other words, acts against continence can be read in a restricted sense to mean just acts of voluntary vaginal sexual intercourse. But acts against continence can in some instances be read in a broader sense to mean “all voluntary sexual acts”, including vaginal intercourse. It doesn’t matter which definition is selected because both include vaginal-penile intercourse as part of the definition. If you do not explicitly reject vaginal-penile intercourse as being included in the term “continence”, then logically, you are including in the word and meaning. Thus, for ESI to reject continence as a requirement is for it to reject being a virgin (possessing juridic virginity) as a requirement, because all agree that continence is lost with intercourse (and not all agree that anything besides intercourse canonically breaks continence).

To clarify this, let’s reword the ESI sentence a bit to help illustrate this point. Reworked, there are two essentially plausible renditions:

It should be noted that there is NO caveat or disclaimer or exception mentioned in ESI #88. It doesn’t say “continence, in the sense of acts proper to the married state aside from vaginal-penile intercourse”.   Thus, virginity, not even merely juridic virginity, is not a requirement for admission to the Order of Virgins according to the Instruction.[1]

To wrap up this portion of this article, it should be noted that the Church does not refer to virginity as merely a material or “physical state” of a person. Rather, virginity has to do with the absence of willed venereal pleasure. Thus, to claim that this passage in ESI is an acknowledgement of the ability of rape-victims to receive the consecration is rather baffling as rape does not destroy continence or virginity! More on this later.

[1] Yet, it appears, only specific sins against chastity qualify as impediments to the consecration according to the Instruction. (This is baffling because when there are restrictions, they are to be interpreted strictly and yet the blanket prohibition against external forum acts against chastity is in the Praenotanda – liturgical law of the Rite… which would trump any less restrictive interpretation given in the Instruction…)